Now Sweet Salone is available on Video on Demand by Amazon


View the trailer at IMDb here.
Posted by Samura Enterprises at 1:24 PM No comments: 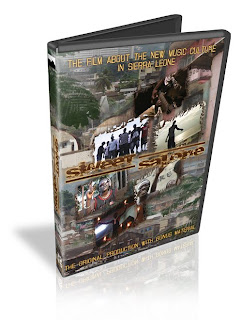 You can get copies of "Sweet Salone" from Amazon.com or Film Baby.


Thanks to all of those who helped make this DVD possible.


I am really not one for blogging as you can see from the limited number of posts on here. (Its hard keeping up with all these websites!)


Sweet Salone is now available throughout the world. For people curious about what Freetown may be like, or members of the diaspora hungry for a piece of home, Sweet Salone will soon be available for instant download or for purchase.


There is really no other piece of media that captures what we have been able to do with Sweet Salone, and I am tremendously proud of the position this small film now holds. Positive media regarding the country of Sierra Leone and the city of Freetown, was virtually non-existent when we started principal photography for Sweet Salone. Now among all of the media depicting the civil war era, poverty, American slavery, and other less desirable subjects explored by media makers in Africa, Sierra Leone (Freetown more precisely) now has a film it can be truly proud of, from beginning to end.


As far as news about the film goes...


The film has already been released and available in Sierra Leone since last year and has received a warm welcome from audiences and even government officials. It is my sincere hope to be able to return to Freetown to chronicle the continued goings on of a developing nation on the rise. Sweet Salone Vol 2. ?


We will have to keep our fingers crossed and hope that everything falls in place. A second volume would be able to capitalize on the notoriety of the first and show audiences much more of what Sierra Leone is about, and has to offer to the popular culture.

The older posts have dead links but I will leave them up anyway. Source Mag links are gone, Chosan's issue with Kanye was corrected and settled by the end of 2009. http://www.sweetsalone.com/ was attacked by a very strong internet virus and has come down. I am considering changing http://www.wundeucemedia.com/ to another provider and updated info so please come again and forgive the temporary dead ends. Thanks.
Posted by Samura Enterprises at 7:50 PM No comments:

Sweet Salone trailer in Japan?? Go ahead and click the link you know you want to.

The internet is truly amazing...
Posted by Samura Enterprises at 7:43 PM No comments:

The New Sweet Salone Official Mashup Trailer is out. You can watch it here or go to the Sweet Salone website.

SOURCE MAGAZINE's blog has featured Sweet Salone! Check it out with this link and send them an email to thank them for supporting Independent Media and standing up for those media makers that are not rich and famous. Definite shout and shots out to The Source Mag Blog site (BRRAAH!! BRRAAH!!) for not being afraid to tell the truth!


The Feature Trailer will be out soon so please come back and view that as well! Dont forget to Register or sign our Guestbook so that we can keep you updated.

C-ya and Wun Deuce Media would like to thank and welcome members of Connect The Docs, and Filmmakers Workshop for their help and support. We look forward to meeting new friends and working with the Boston filmmaking community.

Sweet Salone is currently in the rough cut stage, while we continue to focus on the best outlet for Sweet Salone's audience. The rough cut and trailers are available for private screenings so contact us if you are interested or would like more information.
Posted by Samura Enterprises at 11:19 AM No comments:

Posted by Samura Enterprises at 9:10 PM No comments: